“Grandpa drives an El Camino. Everywhere that we go, he throws his trash out the window, saying, ‘son, I’m just creatin’ jobs.’”

Try as Grandpa might to spin it, littering degrades Wyoming.  The opioid epidemic degrades Wyoming — and America — to a much greater degree by fracturing families, hurting communities, and killing Americans.

Pharmaceutical companies have experienced record growth in recent years.  For example Lannett, the East Coast corporation that owns Cody Labs, has increased annual sales by almost 1000% over the last decade, from $72 million in 2008 to projected sales of $690 million in 2018.

Investing in corporations like Lannett can be seen as a smart business move, but the real costs of opioid pharmaceutical proliferation gets passed on to the public.  In 2013 the Centers for Disease Control and Prevention reported that the annual “economic burden” of prescription opioid misuse in the US was $78.5 billion.  Since then the epidemic has gotten worse, and the White House’s Council of Economic Advisers recently estimated that the cost of the opioid crisis in 2015 alone was $504 billion, nearly 3% of US gross domestic product (GDP).  Even Americans who have never tried opioids, have not lost a loved one to drugs, and have never suffered crimes at the hands of a junkie have been affected financially by the opioid epidemic.

Are Cody Laboratories, the Lannett Company, and the State of Wyoming banking on the prescription drug epidemic actually getting worse?  Why else would they invest millions to increase production capacity to 25 metric tons, 5x the current annual output of 5 metric tons?

According to the NIH, more than 115 Americans die every day after overdosing on opioids, and nearly half of those deaths involve prescription opioids like those produced by Cody Laboratories.

According to the CDC, of the more than 63,600 overdose deaths that year, at least 42,249 — 66% of the total — involved opioids.  Forty two thousand, two hundred forty nine deaths due to opioids was a 30 percent increase from the year before and preliminary data puts the 2017 deaths 13.3% higher than that.

As if this wasn’t bad enough, the actual number of drug overdose deaths in America is probably much higher than the official statistics show.  A recent study published in the February edition of the journal Addiction reported that the country is undercounting opioid-related overdoses by 20 to 35 percent.  Standards for how to investigate and report on overdoses vary widely across states and counties, and opioid overdose deaths aren’t accurately reported in the data analyzed by the federal government.

Currently less than 5% of deaths are autopsied, so we don’t really know with certainty what most Americans die from.  Additionlly, there are obvious social stigmas associated with death by drug overdose, so county coroners have a clear motivation to report otherwise.  More often than not, coroners don’t check for drugs, and even when drug tests come back positive for opioids that may not be reported as a factor in the cause of death.

Of course not everyone who abuses opioids overdoses, and not everyone who overdoses dies.  In a March 6th, 2018 report, the CDC stated that the US opioid epidemic continues to worsen with emergency room visits (reported by 52 jurisdictions in 45 states) for suspected opioid overdoses increasing 30 percent from July 2016 through September 2017. Suspected opioid overdoses increased for both men and women, across all age groups, and in all regions: the largest increase was in the Midwest (70 percent), followed by the West (40 percent), Northeast (21 percent), Southwest (20 percent), and Southeast (14 percent).

Wyoming was not one of the states examined in the recent CDC report because, as the Casper Star Tribune reported on May 6th, 2017, “As prescription drug deaths rock U.S., Wyoming lacks data to gauge overdose severity“.  We don’t really know how many Wyomingites have died from drug overdoses, but at least 304 overdose deaths were reported from 2014-2016.  In 2017 the Wyoming Prescription Drug Abuse Stakeholders group said that when compared to other US States, Wyoming has the 15th highest overdose death rate in the country and is 11th in rates for people ages 12 to 25.

Wyomingites are taking steps to confront the opioid epidemic sweeping across America.  Wyoming Prescription Drug Abuse Stakeholders is educating kids and communities about the dangers of pharmaceutical drugs.  Media organizations statewide are putting out informative coverage on the topic including in-depth reporting on locals who have died from drug overdoses or are still battling addiction.

Teton County may follow the example of many political entities nationwide as it considers lawsuits against opioid manufacturers for deceptive advertising, and the Wyoming State Legislature recently passed two bills addressing prescription opioids and other dangerous legal drugs.

One of the bills requires “certain health care practitioners to file prescriptions for controlled substances with the state board of pharmacy.”  The other bill establishes an opioid addiction task force to study, “accommodat[ing] the legitimate uses of prescription drugs for palliative care with efforts to control the dangerous and illegal uses of those drugs”.  Wyoming’s newly formed task force has been funded with $65,000 to cover travel, salary, and per diem expenses for members.

This is all well and good, but how does $65,000 earmarked for two years spent getting an idea of how Wyoming should go about fighting the opioid epidemic stack up against the $25.5 million that Wyoming recently gave to an opioid manufacturer?  Since 2012 the Wyoming State Loan and Investment Board (SLIB) has loaned Cody Laboratories $25.5 million to fund expansion of their opioid, amphetamine, and cocaine manufacturing facility in Cody, Wyoming

Percentage wise, Wyoming is spending ~0.25% (1/400th) of what it invested in Cody Labs on the newly-appointed opioid addiction task force.

Let’s take a closer look at Cody Labs, the Lannett Company, and their profitable relationship with the State of Wyoming. 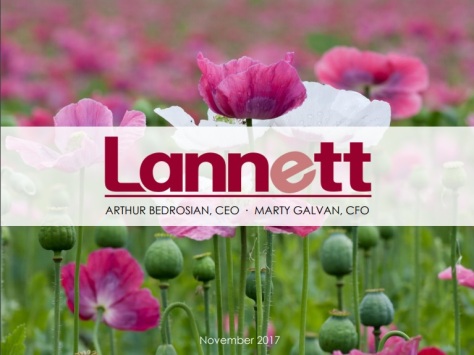 If you’re wondering why a Delaware corporation based in Philadelphia has interest in a Cody, Wyoming Laboratory, the Lannett 2016 Annual Report answers that question:

One initiative that is at the core of the Company’s strategy is to continue leveraging the asset we acquired in 2007, Cody Labs. In July 2008, the DEA granted Cody Labs a license to directly import concentrated poppy straw for conversion into opioid-based commercial APIs for use in various dosage forms for pain management. The value of this license comes from the fact that, to date, only a limited number of companies in the U.S. have been granted this license. This license, along with Cody Labs’ expertise in API development and manufacture, allows the Company to perform in a market with high barriers to entry, no foreign dosage form competition and limited domestic competition. Because of this vertical integration, the Company has direct control of its supply and can avoid increased costs associated with buying APIs from third-party manufacturers, thereby achieving higher margins. The Company can also leverage this vertical integration not only for direct supply of opioid-based APIs, but also for the manufacture of non-opioid-based APIs.

The Company believes that the demand for controlled substance, pain management drugs will continue to grow as the “Baby Boomer” generation ages. By concentrating additional resources in the development of opioid-based APIs and abuse deterrent features to current dosage forms, the Company is well-positioned to take advantage of this opportunity. The Company is currently vertically integrated on two products with several others in various stages of development.

In 2005 Lannett had total sales of $45 million, but after breaking its own records year after year, 2017 total sales were $637 million with projections of sales topping $690 million in 2018.  Their March 2018 Investor Relations Presentation lists total assets at $1,659,000 and total liabilities at $1,066,000, so the total equity of the publicly listed company (LCI) is $593 million.  Lannett claims to operate at an adjusted gross margin of 48-49%, which essentially means they pocket about $2 for every dollar they spend.  Lannett’s tax rate just dropped from ~35% to ~27% which means the corporation will pocket millions more in profits this year.  This prompts the obvious question: why does a company worth hundreds of millions of dollars that just got an 8% tax break need to borrow a measly $25.5 million from the State of Wyoming?

Answer: Lannett didn’t *need* to borrow from Wyoming so much as Wyoming needed to entice Lannett to keep making pharmaceutical ingredients in Cody. “Publicly subsidized, privately profitable” is the name of the game in the modern corporatocracy.  The famous quote attributed to self-proclaimed fascist Benito Mussolini comes to mind:

Cody Laboratories is still seeking an additional $10,750,000 from the State of Wyoming.  Should Governer Matt Mead and the rest of the Wyoming SLIB grant their request?  Please share your thoughts in the comments and consider contacting the Wyoming SLIB members to let them know where Wyomingites stand on this issue.

And Now The Rest of the Story…

US Opioid overdose deaths were five times higher in 2016 than 1999.  Over the last few years, powerful synthetic opioids like fentanyl have ratcheted the death toll higher, but the vast majority of Americans on opioids are using the old fashioned stuff extracted from the opium poppy plant.

Cody Labs is one of a handful of companies licensed directly import concentrated poppy straw. The vast majority of the opium grown on this planet comes from Afghanistan, a country the US military has occupied since 2001.  In 2017 opium production in Afghanistan jumped 87% to a record level of 9000 tons, 4200 tons more than 2016, according to recent report from the United Nations Office on Drugs and Crime

Opium production in Afghanistan has been on the rise since U.S. occupation started in 2001.  Afghanistan has been the world’s greatest illicit opium producer, ahead of Burma (Myanmar), the “Golden Triangle“, and Latin America since 1992, excluding the year 2001.
2001 is an interesting year because late in 2001 the US military invaded Afghanistan, overthrowing  the same Taliban that it had supported in their previous war against Russia.  The Afghani Taliban lost the support of the US Military — and indeed became a top priority target — because they banned the cultivation of opium poppies in 2000.
Afghanistan’s opium production fell by more than 90% in 2001 because the Taliban was able to enforce the ban.  By 2002, under the US occupation, opium production quickly rebounded to previous levels despite publicized claims that the US was cracking down on Afghani opium production.  Either the US military is a lot less effective than the Taliban at enforcing laws, or the US military is disingenuously defending the global opioid market it controls.
In reality, the US Government’s “War on Drugs” is actually a war on competition against unauthorized distributors.  For narcotics ranging from cocaine to opioids, the world’s largest legal (and illegal) drug manufacturing and distribution networks employ the protection services of the US Military.  This may strike some people as impossibly unbelievable, but the tiniest bit of intellectual effort reveals hundreds of reputable sources dating back decades documenting this unfortunate reality.
As such, it should come as no surprise to a thinking human that the State of Wyoming is merely following in the footsteps of the Federal Government by getting in on a little bit of the action.  One Love.  Peace.
If you would like to learn more check out the top four links listed below.

In one year, drug overdoses killed more Americans than the entire Vietnam War did

Omissions On Death Certificates Lead To Undercounting Of Opioid Overdoses

Wade’s struggle with addiction mirrors that of others

State may give bigger loan to Cody Labs

NOTE: These articles don’t write themselves and I don’t get paid very much to research and write them.  I am trying to make a living at this work and could sure use your help.  Please consider supporting my work on Patreon.com or via PayPal.com.  Thank you for your attention and any support you can offer.  Every little bit helps!