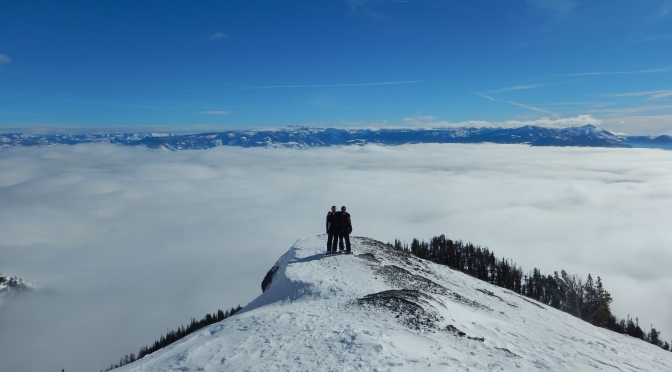 Yesterday afternoon, 1.27.16, I snowboarded JHMR with neighborly Henry and Anthony. We headed out the gates to 4 Pines first thing.  In the afternoon I met up with Ben Blanton (BB) for some inbounds shredding and a late afternoon foray out to Pinedale.

We haven’t had a serious snowstorm in about a week, so JHMR sidecountry is pretty tracked up.  Strong winds overnight on the 26th stripped NE aspects at upper elevations and apparently blew that snow into oblivion because there wasn’t much drifting on leeward slopes: maybe a lot of that snow ended up at middle and lower elevations.

It was foggy in the valley, partly cloudy up high, with high temps in the afternoon contributing to crustier crusts on sun-affected slopes.  There was a temperature inversion so some things stayed fresh at lower elevations that turned into mashed potatoes around 8000′.

When the clouds broke we got a good look at the site of the fatal avalanche that happened on Sunday, 1.24.16.

It’s supposed to start snowing hard on Friday, and right on time because the pickings are getting slim in the Tetons right now.  Today I’m headed to GTNP to see what the shady slopes are looking like. 🙂