Today we had a serious temperature inversion, ample sunshine above the valley fog, and a high cirrus haze trapping heat.  As such, our sweet new pow in the Tetons lost a lot of its loveliness on some sunny aspects at a variety of elevations.

Stuff is certainly still skiing good, but now we have to be a little more selective about aspects and watch out for dangerous breakable crusts and piles of pinwheel crud kicked off by skiers today.

Feeling a little too froggy for my own good I decided to drop my lightest, fattest skis — and a crucial boot — off at Wilson Backcountry Sports for a new binding mount.  My logic being that I could avoid temptation and trouble by limiting myself to schussing the well-traveled slopes of Mt. Glory on my snowboard.

The Pass was so tasty and untracked on Wednesday that I decided to go back again on Thursday.  There wasn’t much to report until today because it was still snowing intermittently and the snow was excellent almost everywhere.

I hoped to get around to the Pyramid today but found myself stuck snowboarding again because my skis weren’t quite ready yet.   My friends Massa Miles and Kadence of OZ joined me for their first foray down the NE Ridge of Glory to the bottom of the Bowl Gut. 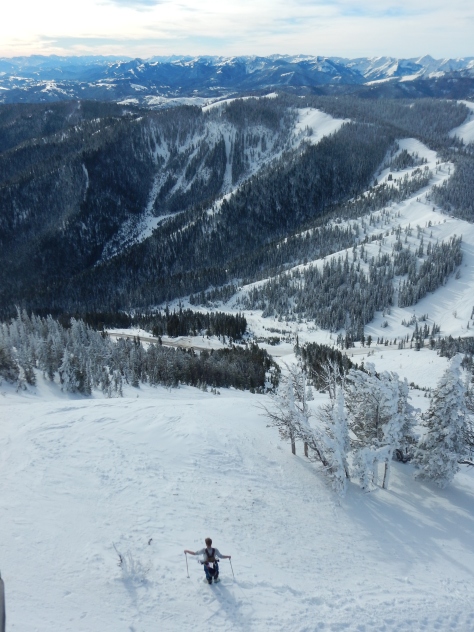 The wind had moved around just enough snow to fill in the old tracks up high, offering consistent creamy skiing.  As the ridge widened we found perfect untracked powder down one of the funnest natural lines trending to skiers’ right.  Gradually the snow got heavier and wetter as we descended.  By the time we hit the highway we were kicking off pinwheels of hot pow: fun at the moment — especially on a snowboard! — but a bummer for the future.

We found cold conditions at lower elevations.  It will be interesting to see where the mid elevation sun crusts start and stop showing up.

Miles and Kadence had to get back to town to quit their day jobs the old fashioned way, so I opted to hitch back up for another lap.  Naturally, Scooter was waiting for a ride and we rallied up the Pass together in a very sporty Prius driven by a friendly dude.

Scooter and I have been hoping to ski together for a while, so we hiked together and dropped down towards Calvert’s Ridge from the top of Glory.  Conditions were great everywhere that hadn’t been stripped significantly by the wind.

After gorilla slogging the flats for a bit we dropped South and found perfect untracked pow that eventually got hot and wet.  We hitched back up from Coal Creek, and I called it a day.

After a few days in the Hole I’m back in Alpine for a bit and hoping that someone put the skin track up Ferry for me already.  Snowblower is busted so shoveling a few tons of deep and heavy is also on tomorrow’s agenda.