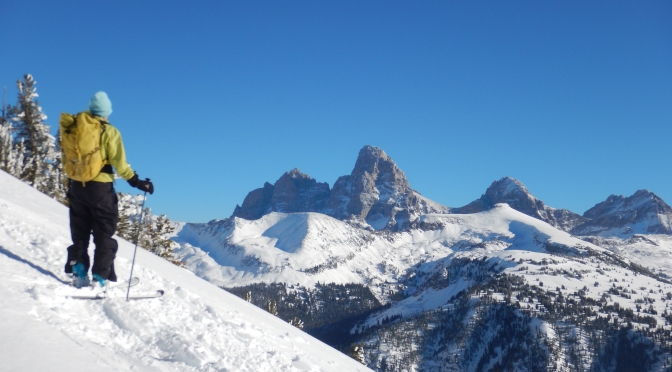 A sweet early season storm centering on last Thursday brought the Tetons a healthy foot+ of fresh snow at mid and upper elevations and several inches to the valley floor.  I haven’t written a snow report since because I’ve been playing all day, tending bar all evening, and sleeping like a baby by night.

Grand Targhee Resort opened Friday and served up the goods to a feeding frenzy of famished powderhounds.  I finally got to ski the Ghee yesterday — Sunday — and it was still very good: bluebird skies, warm temps, soft snow, walk on lifts, and there were even a few untouched powderfields to be found inbounds, especially for those willing to hike a bit for it.

Early season conditions still persist.  I created the biggest coreshot of my skiing career — thankfully without a blown edge — when I hit a football sized rock lurking unmarked in a groomer called Arrowhead.

Luckily, I didn’t end my season right there.  Grand Targhee groomers and patrollers have done a great job getting the mountain ready, but they can’t flag or remove every hazard out there.

Last Friday RT, WD, and I joined everyone and their brother skiing Teton Pass.  We got the last legal spot in the top lot when we pulled up at 7:37am.  At least a dozen more vehicles could have fit, but a lot of people were parked like jackasses up there.  See photo:

Please help spread the word that parking tightly together is preferred to sprawling out.  It puts a damper on their stoke levels when people arriving before 8am can’t find a spot in the top lot, especially on a weekday.

Some people took their chances parking illegally.  This is not recommended behavior because it pisses off WYDOT, TC Sheriffs, and makes the Pass Ambassador’s job more difficult than it already is.  A better bet is encouraging people to park properly and embracing the lower lot when the upper lot fills up.

Conditions were shallow but excellent on Teton Pass.  Most people headed out the South side and hammered the bowls.  We hiked Glory 3x and scored slightly upside down but bottomless pow turns from summit to roadcut on S facing shots.  We didn’t see any signs of avalanche activity.

On Saturday I was feeling a little under the weather and opted to rest: the crud is going around and I don’t want to get it.

My roommate offered me the use of his extra sled and we rallied up the Grey’s River Road to see what things are looking like in the mountains surrounding Alpine.  I’m not a fan of snowmobiles, but I embrace Tom Turiano’s stated philosophy towards them: ride the roads, park at the trailheads, earn your turns.

We were able to ride from the house — barely — on a foot of fresh with a breakable rain crust.  Once you’re past the cattleguard parking lot there is ample coverage on the road to rally up but it’s not groomed.  Big trucks are still rolling around up there alongside minimal sled traffic.

We checked out Squaw Creek and the confluence on the Little Grey’s before I had to get to work.  There is enough snow for road riding, but the backcountry needs more, at least at lower elevations.  Looking out my window right now upper Fairy looks sexy but getting there is still problematic.

It looks like we may get another healthy storm on Wednesday and Thursday.  If you want to ski over the Thanksgiving holiday, Grand Targhee seems like a great option.  JHMR will have very little terrain open unless a miracle storm hits the Tetons, and Friday is going to be a total show there due to $6.00 lift tickets in honor of the 50th Anniversary.

This next storm will hopefully put GTNP into shape, and that’s where I’ll probably be.  Take care.  Have fun!  One Love.  Peace!