The latest storm came and went without bringing the precip levels anyone hoped for.  This morning we got a lot of wind with gusts up to 133 mph atop Mt Coffin and 75 mph atop Rendezvous Mt, but snow accumulations at upper elevations stayed in the single digits.  Please bear in mind that geoengineering is screwing up the climate globally, which includes current Wydaho snow and temp trends.

Maybe wind deposited drifts on leeward slopes at upper elevations offered good skiing today, but Targhee is closed to uphill traffic, and TP smelled like a shitshow starring everyone, their roommates, their brother, their brother’s roommates, etc…

As such I didn’t plan on skiing today until — while bartending last night — a fishing guide friend told me he’d seen substantial snowpack up by Flagg Ranch in the J.A. Rockafucker Parkway.

I have heard that West Yellowstone currently has more snow than we do, so I figured it was at least as worth a look as this old newspaper headline.

Appearances can be deceiving: none of these peaks are remotely skiable top to bottom at the moment, but they sure look great for the tourists.  The roads were kinda nasty heading North this morning: slick in spots with strong, gusty winds.

Snow levels definitely increased as we drove higher up the Yellowstone Plateau, but we never saw enough coverage to make any of the short and not exceptionally sweet roadside shots worth our while.

Before we knew it we were at the deadend snowbank wondering what’s so special about Yellowstone anyway.  Checking out Huckleberry Hotsprings seemed like the sanest thing to do on account of the fabulous Flagg Ranch gift shop being closed for the season.

I hadn’t been to Huckleberry Hotsprings since 2006 when I “completed” some court ordered community service flagging ski trails there.  I got 20 hours from Teton County for “theft by swindle” after getting caught skinning up to Thunder Lift at JHMR.

Somewhere in the 9 years since I smoked out any knowledge of how to find the springs.  Fortunately, government signage now tells you exactly how to find Huckleberry Hotsprings while simultaneously warning you that it’s illegal and potentially deadly to dip into the water there: mixed messages.

No one else was around.  We were the only car in the lot.  There has been a lot of new development around Flagg Ranch since the last time I visited, mostly employee housing and related infrastructure.  I got us embarrassingly lost before stumbling across this convenient sign. 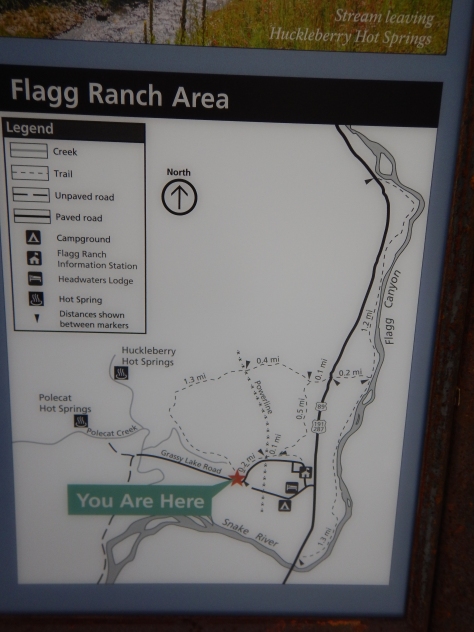 There is enough snow around Flagg Ranch to skin the flats with a few inches of fresh softening it up.  The surrounding trails are great for XC skiing at the moment.  Skate skiing seems pretty doable on unplowed roads as well.

Eventually we found the hotsprings only to discover that the traditional pool at Huckleberry has been totally destroyed:

In addition to removing a marvelously minimalist man-made dam, it looks like the Feds also smashed up a natural rock formation below the waterfall feeding warm water to what was once a magical grotto filled with geothermal fun.

This apparent sledgehammery looks to be a small scale but nevertheless prime example of our tax dollars working hard to make this planet a less enjoyable place to live and play.  Other, larger examples include the endless wars, deregulated financial systems, geoengineering, ignored ecological disasters like Fukushima, and politicians in bed with the GMO, fossil fuel, pharmaceutical,  and assorted other corporate lobbies.

Please bear in mind that Nikola Tesla rendered fossil fuels obsolete over 100 years ago by learning how to harness lightning.  The geothermal energy waiting in Yellowstone could power the entire US grid with a lot less ecological impact than coal, hydroelectric, fracking, etc.

I cannot claim to have actually gone swimming today for fear of Federal prosecution, but suffice it to say that we found a smaller pool near the vandalized pool where the water looked just right if not a little too mucky around the edges.

After a few hours of admiring the water we skinned back to the car.  The sunset was spectacular despite a few lingering jet trails.  We saw a bald eagle, a bunch of ducks, and some friendly otters swimming in the waters of Polecat Creek.  Apparently they didn’t get the memo about amoebic meningoencephalitis.

The point is that Huckleberry Hotsprings is currently working despite state-sponsored vandalism.  If the snow continues sucking due — at least in part — to state-sponsored climate change, at least those of us willing to risk a federal offense can soak our worries away in a crappy little cesspool amidst the largest untapped geothermal resource on any continent.  They don’t call this the land of the free and home of the brave for nothing!