On February 11th, 2015 the local media really outdid themselves.

On a typical day our award winning newspaper contains 70% advertising, 20% regurgitation of standard boilerplate from the AP (Associated Presstitutes) for “coverage” of the “big issues”, and 10% local stories largely centered on non-issues like sports.

The front page of the JH Daily contained a classic disinformation campaign about DC government panels proclaiming that it might be the right time to “start limited, preliminary testing” of geoengineering — aka weather/climate modification — technologies.  Nevermind that these technologies were patented decades ago, were used as a weapon by the military in the mid-1960s,  and are currently being used for economic, political, and military purposes far less noble than “saving the planet from climate change”.

Yes, humans are changing the climate, but CO2 is a minor worry compared to people intentionally playing god with our weather and climate.

Today’s Jackson Hole Daily also contains an article encouraging readers to buy carbon credits purported to save the rainforest and thus prevent climate change.  Nevermind that climate modification technologies are being used to intentionally manipulate the climate.  Nevermind that the current financial system built upon the premise of infinite economic growth is inherently unsustainable.

Wednesdays are a big day for local nuzak because the Jackson Hole News and Guide’s weekly edition also comes out.  Page two of this week’s paper alerts us to the record heat wave sweeping the region.  Nevermind all the planes consistently creating heat trapping cirrus hazes high overhead.  Those couldn’t possibly be a factor, right?

Page three cites Bill Nye “the celebrity, televised, dancing with the stars, pseudo-scientific-propaganda guy” claiming that carbon emissions are to blame for high temps and wacky weather here and globally.  Pay no attention to the lines in the sky, the historical fact that the mainstream media lies, or the parastic politicians and billionaire banksters behind the curtain! 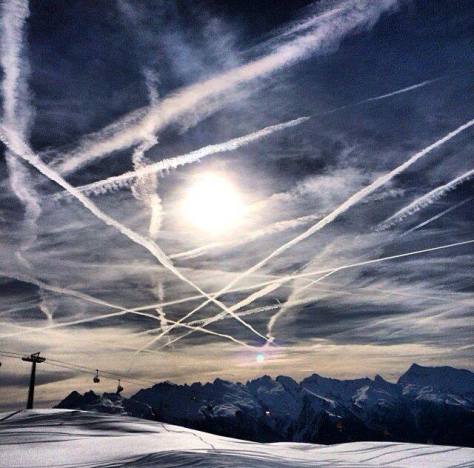 According to Nye as quoted in the JH News and Guide, “ninety-eight percent of the scientists in the world aren’t trying to fool you.”  Nevermind that the vast majority of scientists are not climatologists and have not expressed an official opinion on climate change.  Nevermind that the 98% consensus statistic Nye improperly cites is a bastardized misinterpretation of one study where researchers “analyze[d] the evolution of the scientific consensus on anthropogenic global warming (AGW) in the peer-reviewed scientific literature, examining 11,944 climate abstracts from 1991–2011 matching the topics ‘global climate change’ or ‘global warming’. [They found] that 66.4% of abstracts expressed no position on AGW, 32.6% endorsed AGW, 0.7% rejected AGW and 0.3% were uncertain about the cause of global warming. Among abstracts expressing a position on AGW, 97.1% endorsed the consensus position that humans are causing global warming.the abstracts of peer-reviewed climatology papers.”

In short, 2/3rds of climatologists expressed no official opinion about AGW.  Bill Nye claims that 98% of all scientists — regardless of their field of study — agree with him.  Nevermind the 49 high level scientists at NASA who’ve publicly called out the climate kooks.  Nevermind the other human factors obviously changing the climate like intentional weather/climate modification programs.

According to Nye as quoted in the JH News and Guide there are too many people on this planet, so apparently killing off a few billion would be the scientific thing to to.  According to Nye, climate change is “the biggest threat facing humankind”.  Nevermind the endless war, and the weather weapons being used covertly in waging it.  Nevermind Fukushima, fracking, pesticides, GMOS, and deadly pollution of various sorts: CO2 is non-toxic and as even more “all natural” than most of the food advertised as such, but apparently its the greatest threat to all of humanity.  Nevermind that episodes of global cooling (aka ice ages) have historically harmed living things more than rising temperatures.

Bill Nye’s proposed solution to the “problem” he wants everyone to flip out about is a, “fee and dividend system.  If you use a ski lift powered by fossil fuels, a surcharge would be factored into the price of the ticket or there would be an attached fee on good imported overseas by freighters.”  In short, CARBON TAXES.  Bill Nye thinks those who can afford to pollute should pay a premium to do so, and the rest of humanity should be priced out of existence because “overpopulation is the problem”.

Who pays?  Everyone else.  Who can’t afford to eat?  The poor.

Is the planet saved?  Not likely, so long as governments and corporations continue covertly manipulating the weather as a tool and weapon.

Nevermind that climatology is psuedoscience based on modelling, not observable, repeatable experiments in actual reality.  Personally, I do mind, and I hate being lied to, especially about major issues being used to bring about major changes with major benefits to the existing power structure.

Pay no mind if you feel the need to bury your head in the sand, but bear in mind that 65 years ago the Walt Disney Corporation was collaborating with the DOD, Army, Air Force, etc. to sell the idea of using climate modification technologies to melt the ice caps, steer storms, punish enemies, etc.  Today the “best mid-sized newspaper in North America” told us that these technologies would only be used to prevent save the planet, and that testing has yet to begin.  Someone is behind the times, and it’s not me or Walt Disney circa 1959.

You don’t have to take my word for it.  The historical record can speak for itself.  Will you listen?