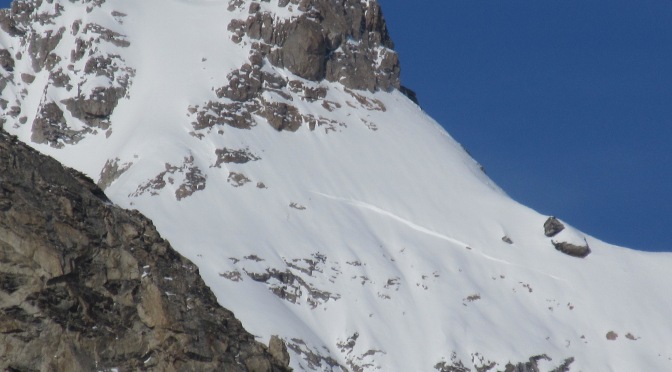 Today I found variable conditions on one of my favorite runs on the smaller peaks of GTNP.  I had been stuck working for five days and I hadn’t seen the sun for four, so I was jonesing pretty hard for both this morning.

Dani and I attempted to cross the river in a canoe to ski some new North facing terrain but the eddies that make it reasonably safe were almost entirely buried in ice.  I set off for GTNP solo, hoping to squeeze in a good tour before bartending downtown at 4pm.

I got pretty hopeful as I left the parking lot because the snow was soft and sugary in spots and crusty in others: maybe it would be creamy pow on some aspects overhead.  A thick fog layer hung at around 8,000′ and the sun overhead felt amazing despite the lingering, spreading jet trails in the high cirrus haze.  Temps were mid-teens to lower twenties, and the snow seemed to be holding up alright though it had already gotten crusty on previous days on various aspects.  Shady, wind-protected slopes seemed the best.

I ran into an Exum Guide friend with client in tow who filled me in on what slides had occurred and what had gotten skied.  This conversation gave me the confidence to have a look at one of my favorite steep, shady lines of all time: Lebowski Ledges to Logjammin’.

As I approached the summit I spotted a slide had occurred on the S side of the Grand.

I also noticed that the chemtrails were atrocious today and made a video about it.

Conditions on the descent were very variable.  Decent in some spots, mediocre in most, but never totally awful.  The shady slope seemed to have been affected by high winds up high, freezing fog at mid-elevations, and trees dropping bombs due to warm temps down low.

Sunday I’m writing an article before tending bar at Melvin.  Monday its back into doubles at work.  If the storm comes in cool enough I might catch a cold.  We’ll see.  Have fun out there.