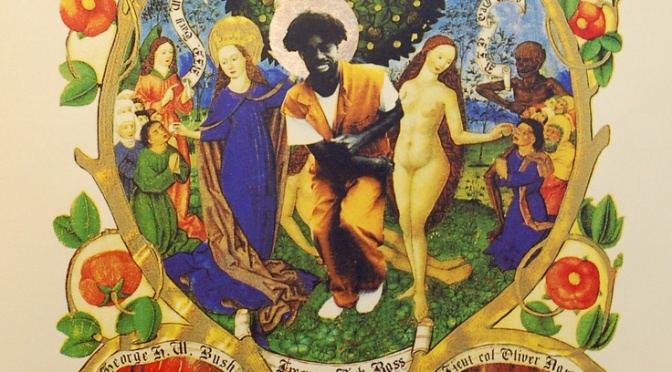 Local artist Aaron Wallis is well-known for stirring the pot, and his latest Street Bible series of screensprints does just that.  Last week the JH Weekly featured some of Aaron’s artwork on its cover.  This artwork draws attention to the Iran-Contra Conspiracy, a well-documented instance of corruption and drug-dealing by high level US Government officials and agencies. 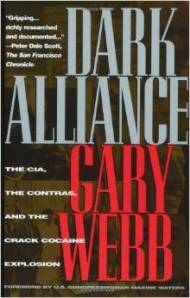 The Iran-Contra scandal was a confirmed conspiracy extending to the highest levels of the US Government that involved — among other shady things — trading weapons for cocaine.  US weapons went to Central American terrorists and in exchange Central American cocaine flooded American streets, directly causing the crack epidemic that ravaged American cities from the early 80s’ onward.  The CIA oversaw these dirty dealings, and rightly earned the nickname “Cocaine Import Agency”.

The best book on this topic was published by San Jose Mercury Reporter Gary Webb in 1996.  His masterpiece “Dark Alliance: The CIA, the Contras, and the Crack Cocaine Explosion” stands as a testament to true investigative reporting and journalism at its finest.  Anyone interested in learning more about Iran-Contra should pick up a copy.  Webb died in 2004 from two gunshots to the head.  Webb’s death was ruled a suicide, but many questions surrounding his death remain unanswered.

Whether you can believe it or not, the Federal Government’s War on Drugs was — and is — actually a war on competition because the largest drug dealer in the western world since the Vietnam War has actually been the United States Government.

Absolutely corrupt institutions conduct absolutely corrupt operations.  The endless wars of aggression around the globe come to mind as a good example.  Closer to home, the US incarcerates more of its citizens than any other country, and over 50% of American prisoners are there due to drug offences.  Meanwhile, the really big drug dealers operate with impunity because they’ve got direct ties to the same government persecuting small time pot growers and such. 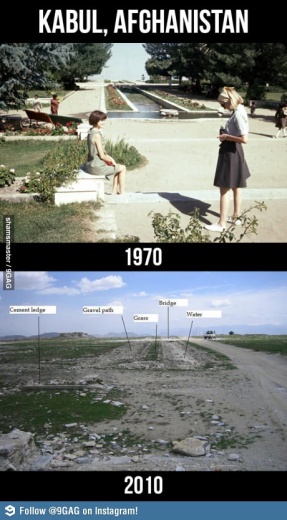 Anyone who doubts this unfortunate reality needs only study a little history with an open mind.  The last 34 years of US involvement in Afghanistan is a great place to start.

Afghanistan was a peaceful, prosperous, and relatively progressive country during the 1960s and 70s,but then it became a theater for opposing Russian and American interests.

In 1979 Russian troops invaded and occupied Afghanistan much like American troops invaded and occupied Afghanistan in 2001.  In 1980 the US started funding the Taliban under the auspices of “Charlie Wilson’s War” with intent to kick the Russians out of Afghanistan.  The situation resembled the Vietnam War of 20 years before: US interests vs Russian interests playing out at the expense of a disenfranchised and rapidly disintegrated third party, in this case, the Afghanis.

Ronald Reagan called the Taliban “the moral equivalent to America’s Founding Fathers” in 1985 because they were helping the US whoop Russia in Afghanistan.  One of the top leaders of the Taliban was a young man named Osama Bin Laden.  In the mid-1990s Mr. Bin Laden was widely regarded as a hero by the Western media.

In exchange for US support, the Taliban supplied the CIA with a opium which generated unfathomably large and untraceable profits for the US Government on the global black market.

According to the UNODC, Afghanistan’s opium production has increased, more than 15-fold since 1979. In the wake of the Soviet-Afghan war, the growth of the narcotics economy has continued unabated. The Taliban, which were supported by the US, were initially instrumental in the further growth of opiate production until they revolted against US interests around the turn of the century: In 2000 the Taliban implemented a ban on the crop and burned most existing fields, resulting in the destruction of 90+% of production in a country that had been producing the majority of the world’s opium. 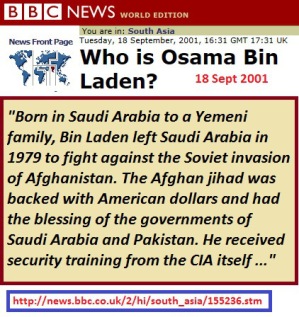 As we all know, the US Military invaded Afghanistan in 2001 under the pretext of hunting for a former CIA asset and US ally who’d supposedly gone rogue: Osama Bin Laden.  Strangely, OBL has been dead for years but the US is still in Afghanistan 13 years after the false flag attacks of 9/11/01.  Perhaps the US military industrial complex was/is more interested in controlling the global opium market than they were committed to tracking down a conveniently terrifying bogeyman.

Today, Afghan opium production is at record levels, the US oversees the drug’s distribution, and not-coincidentally America has a nasty heroin problem, but you don’t have to take my word for it…

In summary, throughout the 1980s and 1990s the US Government was trading weapons for cocaine, American streets got flooded with coke and crack, and a costly epidemic of drug abuse ensued.  Since 2001 the US has occupied Afghanistan and has overseen the production of the majority of the world’s opium and heroin.  Not surprisingly, an epidemic of opiate-based pharmaceutical and heroin abuse is currently sweeping across America.

History doesn’t repeat itself, but it rhymes.  The fact that our own government is pushing drugs upon us is bad enough, but its nothing compared to what they’re doing to our weather.

Ironically, earlier this summer the JHWeekly was less generous in their coverage of an ongoing, well-documented, and even more disturbing conspiracy: covert manipulation of Earth’s weather/climate by similarly shady military industrial complex warmongers.  Here is the article they wrote in response to the videos I made calling out the local media for their failure to address the truth about climate change, geoengineering, weather modification, and weather warfare.  Below it are the videos in question.

THE SHEEPEATER: JH NEWS AND GUIDE LIES ABOUT CLIMATE CHANGE

Want more info?  My videos speak for themselves…