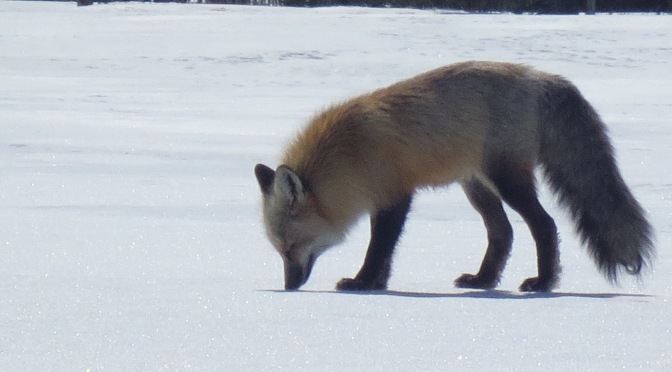 April 14th, 2014:  Teewinot, East Face (attempt): Today the Marlonboro Man and I attempted the East Face of Teewinot.  We weren’t sure what yesterday’s storm had done up there so we didn’t expect to summit but hoped for the best.  Today’s weather forecast looked perfect.  Conditions proved less-than-ideal. 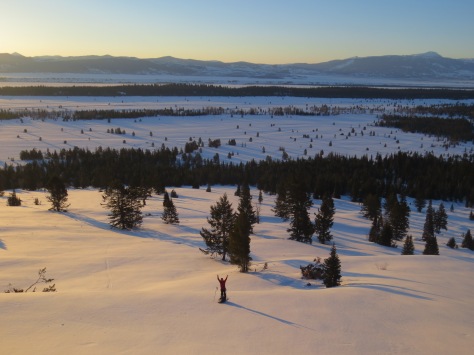 We left the trailhead on bikes a little before 6:00 am and found the road in great shape aside from a little drifting from N winds and trace snowfall the day before.  It was bitter cold, totally windless, and crystal clear: perfect weather for starting a spring tour.

We saw a plateau of flash frozen piss in the middle of the road which got us surmising that we were not the first to pass this way that day.   At the end of the road we ran into Skippy John who informed us that he’d spotted a pair of headlamps near the Worshipper and Idol Pillars in the rapidly brightening twilight: Guinea Pigs + Existing Bootpack = Great News.

Surprisingly, GTNP had plowed the road most of the way to Lupine Meadows trailhead so we had to skin only a few hundred yards on the flats before hitting the mellow, meadowy incline N of the summer trail up the Apex. 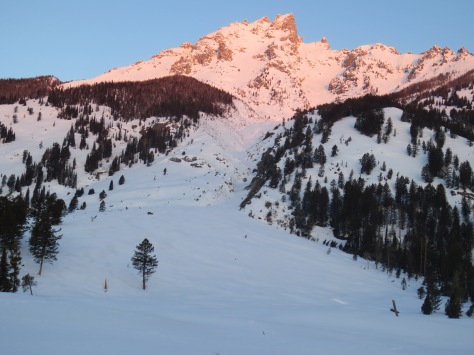 As the alpenglow hit the mountain we saw what appeared to be a deep bootpack and descending ski tracks by The Worshipper and Idol.  Whoever got an early start had apparently opted to turn around at first light.  This strengthened our concerns that a lot of fresh snow had been deposited on the face during the previous day’s storm, but we were already out of bed and dressed so we kept ascending to assess conditions, take a closer look, and to soak up the alpenglow on a perfectly clear and windless day.

Skinning was firm and grippy thanks to a dusting of fresh on existing sun crusts.  We did a little booting down low and it was surprisingly supportable everywhere but in the deep shade.  The wooded ridge up the Apex had a few inches of fresh blown around on top of sun crusts.  Once we crested The Apex we saw five ascending skiers gearing up to bootpack below The Worshipper and two more skiers just ahead of us.

The snow was getting deeper (4-6″ average) and drifty but remained quite cold, so we decided to follow the excellent existing skin track up to The Worshipper, and to reassess once we got there.  Upon reaching the small flat spot just below the pillars we noticed that the five skiers ahead of us had turned around near the same point where the early bird duo had: not a good sign.

Marlon and I decided we didn’t want to be “that guy” who dies attempting something 7 people had already backed off of, so we changed over quickly and descended.  I’m assuming that they encountered deep drifts and sketchy windslabs just above the Pillars but am not sure because I didn’t get a chance to ask anyone.

Below the Worshipper and Idol we found 6″ of dust on rock hard chunks of debris.  Yum!  Off the N aspect of the Apex we found six perfect powder turns each followed by a kinda-grabby zipper crust on 3″ of fresh: late afternoon and evening sun from the day before had already nuked our latest snow.  At lower elevations things were softening up nicely and a dusting of fresh had given the existing corn a nice feel.

As we geared up to bike back we spotted a friendly fox who appeared to be hunting the margin between plowed road and 2-3 feet of snowpack.  The fox let us get surprisingly close, and that capped off a great day. 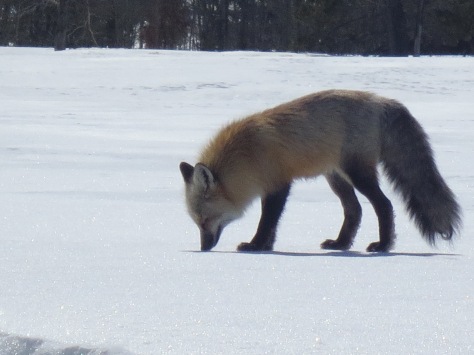 I’m sure there were more than 6 turns worth of powder skiing to be had out there today but am not sure what would have been best.  The best snow we found was on N facing aspects around 10k feet.  Some SE aspects also looked fun where heavy drifting occurred.  Fun?  Yes.  Safe?  Not quite, but what is?