Howdy Stranger!  Yonder is Jackson Hole, Last of the Old West™.  Here you’ll enjoy streaming HD TV on your smartphone, tablet, and laptop thanks to our ever-expanding 4GLTE network!

Instagram from the ski slopes or while drifting down the Snake!

“Check in” with Facebook from the Wildness so your friends — and the NSA Data Centers — know exactly where you are!

Documenting your Jackson Hole Wild West Adventure©™® will be easier than ever because every iPhone photo you take has your GPS coordinates automatically embedded into the image file!  Suffering from memory loss?  Don’t worry: your phone knows where you’ve been!

Bathe in the sacred waters of the Snake River (only polluted with slight traces of geoengineering particulates) while soaking up the electrosmog from  our high-capacity power lines, our ever-evolving network of cell towers, dozens of other large antennae, hundreds of WiFi networks, thousands of “smart” phones, thousands of “smart” appliances, and the 15,000+ “smart” meters monitoring our power consumption, sharing our personal habits, and inducing “dirty electricity” throughout the electrical grid crisscrossing this pristine, protected valley!

You’ll love connecting with nature while endless, erratic waves of unnatural wireless energy continually connect with  your electromagnetically sensitive body!  Riding the mood swings  induced by chaotic electrosmog is a lot like riding a bucking bronco!

The fact of the matter is that people love Jackson Hole because we have amazingly integrated technology, not amazingly unprecedented scenery.  Nature is for the birds!

Some wimps worry that all this awesome information pulsing through everything and everyone continually could harm human and environmental health, but they’re nuts!  Thanks to wireless and utility sponsored “science” the jury is still hung on this issue, but don’t you worry your purty little head either way: our local healthcare system is among the best in the world!

If, that is,  you can afford to get sick.

Jackson Hole and Teton Valley are appealing to residents and visitors partly because they provide an escape from the “real world”.  Locals and guests alike enjoy reconnecting with the natural world while recreating in the surrounding mountains.

Unfortunately, reconnecting and rejuvenating is becoming more difficult as the most accessible mountains are littered with evermore electromagnetic field generators of all sorts.

A trip South from the top of Teton Pass provides the most obvious example of this unfortunate situation:  high-capacity power lines  parallel the access road leading to an ever-growing assortment of digital antennae.  Signs warn skiers and hikers to stay away.  How far away?  The signs — many of which are only attached with zip ties — do not say.

At JHMR a trip up Apres Vous reveals a cell tower disguised as a large pine tree, and a newish building near the upper tram dock warns visitors to stay away because it emits powerful EMF.  How far away?  The sign doesn’t say.  Additional antennae sprout from the top of Corbet’s Cabin, and no one really knows how this EMF affects the wafflemakers, patrollers, trammies, and night creatures who spend hours every day in close proximity to these assorted antennae.

A trip to the top of Snow King reveals a massive digital communications tower right next to the Panorama House which apparently emits no EMF because there are no signs warning people to stay away.  Higher and to the East a number of older TV and radio antennae sway in the breeze while pulsing EMF into the town below.

As for the TOJ proper, a hidden cell tower already exists atop Old West Storage near the Y intersection, two new towers recently went up in South Park, assorted towers surely exist that practically nobody knows about, and a tower disguised as a light pole is planned at the County Fairgrounds in the heart of town.  Members of the Town Council are apparently sane enough to ponder the health impacts of a powerful antennae right next to the grandstand, but apparently haven’t considered the impacts on the people living and working directly across the street.

Even Grand Teton National Park has erected a large new communication tower for visitors to admire as they cross the Snake River near Moose: what was once a pristine viewscape of the Teton Range is now blocked by an offensively massive, 5 story garage and a communication tower twice that tall in the foreground.

Don’t even get me started on the WiFi, “smart” meters,  and the guy at the bar streaming some obscure sporting event on his laptop, or the family failing to enjoy dinner together because they don’t know how to put their phones away.

This entire valley is humming with electrosmog.

While we’re at it let’s just helicopter  a few plate antennae to the summit of the grandest Teton, string a few power lines down the currently underdeveloped East Ridge, and run them along the Park Road (West side of course) all the way back to GTNP’s sprawling new HQ.  Then mountaineers throughout the high peaks will be able to Skype with their climbing partners on route and enjoy HD entertainment and videocalling while camping in those boring old mountains.

It’s a safety issue, really.  A matter of national security, more or less!  Cook your testicles with a lap top, fry your brain with a smart phone, pay your plan every month, and let the government steal all your information or the terrorists (who didn’t attack us on 9/11 because Cheney actually did) win!

How many towers will be enough?  Enough for what?  What are all these towers really for?

Wireless industry research tells us there is nothing to worry about just as Monsanto tells us there’s no reason to be concerned about the proliferation of  GMO foods.  Less biased researchers whose paychecks don’t depend on wireless proliferation tell a different story:

Cell phones are proven to cause cancer, biological stress, psychological stress, sleep disturbances, and depression.  Electrosmog in general has been linked to diabetes, cancer, ADHD, autism, heart disease, and increased mortality from the assorted “diseases of civilization” afflicting more people globally as the proliferation of electrical, digital, and wireless technologies continues.

The human body is highly susceptible to the influence of outside electromagnetic fields, and scientists have known this for decades.  Government and military experiments with electromagnetic mind control and weaponry began with the Nazis during WWII and continue in the US, Russia, China, and in other countries to this day.

What if wireless weapons were used to silence dissenting voices, induce paranoia or lethargy, or to cause the sickness and death of concerned citizens who stand in the way of the military industrial complex? Could cell phones, WiFi, smart meters, GWEN towers, and god knows what else is out there be Trojan Horses for total governmental control and the complete subversion of dissent and true democracy? 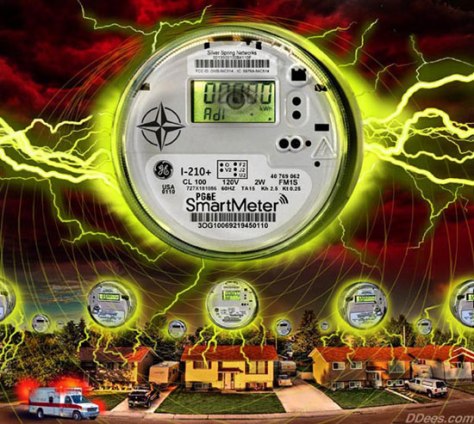 Unfortunately, LVE layed off all their meter readers and installed creepy smart meters (made in China) while the rest of this valley was sleeping.  Now we’ve got surveillance cameras at every major intersection, as do most cities I’ve visited recently.  When will enough be enough when it comes to electrosmog and cybersnooping.  Enough will never be enough until a mass of people scream in unison: ENOUGH!

Cell phone towers are currently a big issue in Teton County, Wyoming and with good reason:

1) They’re NOT good for human health.

2) They’re NOT good for environmental health.

3) They’re NOT good for the health of a community.

5) They’re NOT being proliferated for the reasons stated by government and industry.

6) Government has made their spread almost unstoppable by making it “illegal” for communities to interfere with wireless providers’ insane quest to cover the Earth with electrosmog.

A few weeks ago I talked with a construction workers from Idaho building towers on Teton Pass.  They said they knew of at least 20 more cell towers planned for Jackson Hole in the near future, and said their business is booked up solid for the next two years.

Hopefully people wake up to the insanity before every playground and park has got a creepy tower beaming God knows what down on the children playing below.

Stuff like this makes me want to head for the hills, but I’m going to stick around and see what happens for the sake of all of us.  Awareness is more than half of this battle.