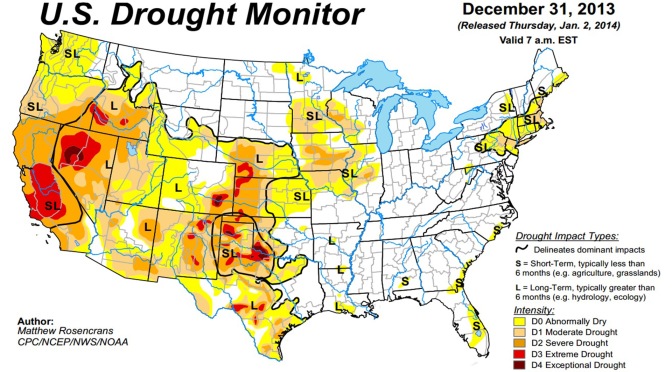 Jan. 4, 2014 — California just endured its driest year on record, with no signs of relief coming anytime soon. In San Francisco, the city is seeing its driest year since records began during the Gold Rush year of 1849. At ski resorts in the Sierra Nevada Range, some resorts have not opened yet and all others have only opened a small percentage of their total terrain due to lack of snow.

A lack of rain and snow this winter could bring catastrophic losses to California agriculture, as state agencies slash water allotments. California ski towns are already feeling the pinch as visitors opt to visit resorts with snow.

Jackson Hole, Wyoming has set skier visit records throughout the Holiday season, partly because skiers who would have visited California resorts are going where the snow is.

Why is California experiencing such an unprecedented drought?

The mainstream media often blames El Niño, La Niña, climate change, global warming, CO2, and other assorted factors for the weird weather we’ve experienced lately, but what if more obvious factors are actually to blame.  Clouds affect the weather and clouds are essential to rainfall so why don’t the mainstream climatologists, environmentalists, and media ever talk about the clouds?

Is air travel over the Pacific Ocean and California killing California’s snow or are covert geoengineering programs intentionally inducing drought over the Western US?

Watch the video, do your own homework, and make up your own mind. Whatever you do, don’t trust the mainstream media to tell you the truth or to do your thinking for you. One Love. Peace.