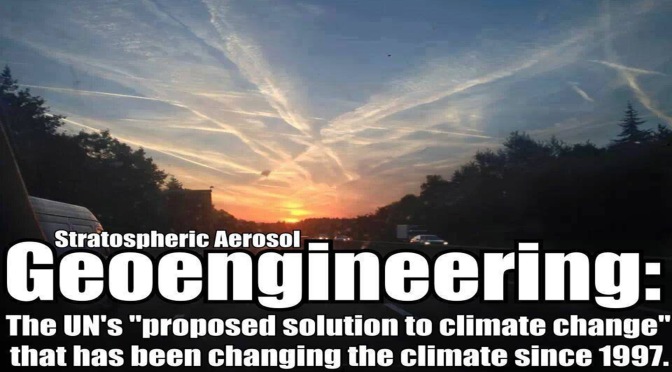 Google News is bursting with recent articles about the dangerous drought in California. CBS Los Angeles reports that California will try out the “new technology” of cloud seeding.

Apparently the mainstream media doesn’t know that cloud seeding is an old technology that has been used commercially and militarily for over 60 years.

The mainstream media also fails to acknowledge that “proposed” climate modification programs are already being implemented globally, that these programs cause drought, and that there is ample evidence in the skies that the record drought in California is being caused by these geoengineering programs.

As the worst drought in California’s history continues, concerned citizens around the globe are protesting against ongoing stratospheric aerosol geoengineering programs proven to cause drought and greenhouse warming.

The mainstream media and controlled-opposition “environmentalists” are attempting to spin the story and convince the public that geoengineering is the solution and not the problem.

Fortunately, we all know better and will be protesting proudly this Saturday, January 25th against the ongoing institutionalized insanity of climate manipulation and weather warfare.