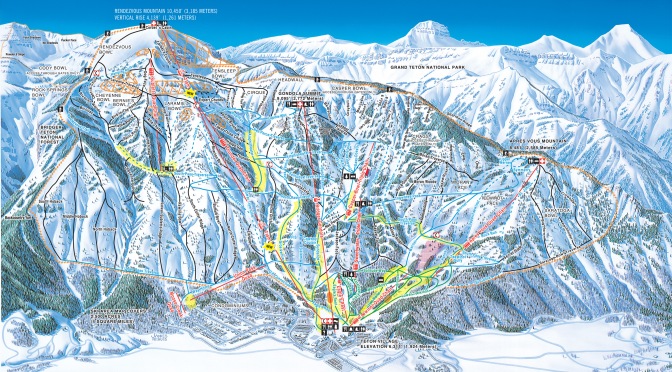 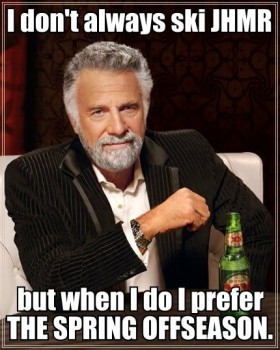 I’ve enjoyed skiing Rendezvous Mountain while JHMR is closed for the last decade.  In that time I have never seen a sign, met a person, or read any document that told me backcountry skiers weren’t welcome  during the spring offseason.

I wrote this post about offseason skiing because a nasty rumor spread throughout the valley last winter that Rendezvous Mountain is off limits during the spring offseason.  This rumor originated somewhere at JHMR, and locals were justifiably concerned.

If JHMR management is attempting to change a precedent and limit offseason access to one of the funnest *public* mountains on Planet Earth, it’s happening right now.  Imagine if Snow King decided to limit uphill access during the offseason.  How well would that fly?  And why?  Why?  WHY?!

The only reasonable justifications for limiting access are safety concerns, but skiing always has been and always will be an inherently dangerous activity.  If JHMR’s upper brass is concerned about the safety of a few offseason skiers, why do they operate a ski resort and subject hundreds of thousands of customers to similar risks throughout the season?  Lawsuits generally don’t stick if skiers get hurt while resorts are operating, and lawsuits certainly don’t stick when resorts are closed.  If some idiot plasters himself against a snowcat or drops into Ragin’ Cajun it wouldn’t be JHMR’s fault.

This article has gotten a lot of harsh feedback (when originally posted at OuterLocal.com).  Some anonymouse commenteers claim that I’m spreading inaccurate information about National Forest access, but no one has provided me with any documentation that JHMR has the legal footing to ban the public from accessing *our* lands during *their* offseason.  Show me the proof, show me the precedent, show me the sanity of the decision to do so, and I will gladly adjust this article accordingly.

Some of the anonymouse commenteers accuse me of threatening the tourist economy of Jackson Hole.  Rest assured that no one is going to lose their job — except for maybe me — because of one article expressing one man’s opinion on why he prefers to ski Rendezvous Mountain when JHMR is closed.  The tourist money will keep flowing, and the sprawling development that was once Teton *Village* will keep on growing.

If some of my reasons for preferring to visit the Vill when JMHR is closed offend you, please don’t shoot the messenger.  I’m on your side.  It’s not my fault that JHMR is expensive, increasingly crowded, and gets tracked up quickly on powder days:

*I didn’t triple slope-side accommodations over the last decade or build a golf subdivision at the base.

*I didn’t decide high rollers can fork out the big bucks for guaranteed first tracks, nor did I open a fine dining establishment at mid-mountain.

*I don’t make movies hyping up the place, I don’t market the resort globally, and I don’t see dollar signs or plot out my next development project when I think about JHMR.

Most importantly, I don’t mean to offend the people who love Jackson Hole Mountain Resort for all the right reasons, so please don’t take this the wrong way.  If more people thought Jackson Hole sucked, fewer people would ski here and…

I heard it’s too steep…

and the snow is better in Utah…

and its too expensive to visit (forget about living there) …

and the locals are a bunch of unstable, unwashed Wyomingites.

All that said, on with the 10 reasons I prefer Rendezvous Mountain when JHMR is closed.  Caveat lector… 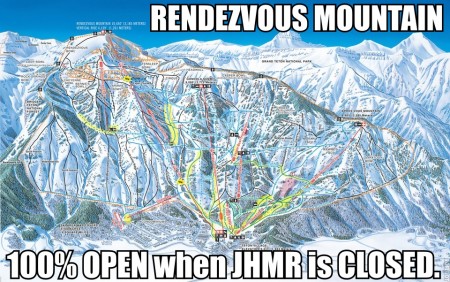 1.  No cost.  As life should be, off season skiing is free!  Daily lift tickets to JHMR cost a ridiculous $99.  Season passes cost an equally absurd $1,655, which works out to $12.25 per day for the 135 days the resort is open.   Embrace financial sanity and ski when its free.  Odds are you spend more time working to earn $99 than it takes you to tour a peak like Rendezvous Mountain bottom to top 2-3x.  I know that’s the case for me.  Do your own math, but don’t forget to factor out ~30% of wages for local and federal taxes.  ~$136 earned = $99 spendable dollars in your pocket.

2.  No closures, ‘trollers, or rules.  You won’t get your pass pulled for skiing closed areas because 100% of Rendezvous Mountain is open when the resort is closed.  That said, don’t expect signs and cordage to steer you to safety in the offseason.  Don’t expect anyone to sled your crippled body off the mountain either.

3.  Guaranteed first tracks down the classic descents.  When open for business, JHMR is almost always tracked up, hacked up, or fracked up with the exception of the first hour or two of a bottomless powder day.  In the off-season the mountain rarely if ever gets tracked up.  On a good day on a good year you can ski perfect pow all day all over the Rendezvous Massif and never see another soul.

There’s no need to beat the first rays of morning light to the tram dock, stand around in the cold for 90 minutes, and then rush, rush, rush only to find that the ‘trollers, early box bro bras, and guided billionaire  brats nabbed all the best steep shots.  On an off-season powder day a motivated skier could score bottomless first tracks down Alta 0, Tower 3, Corbet’s, Spacewalk, and Four Shadows (or, of course, Central) before heading back inbounds to nab another untracked Alta Chute en route to fun turns out Lower Tramline.

4.  No noisy crowds, kooks, bro bras, billionaires, or bad vibes. Do you feel like livestock at a slaughterhouse while waiting in lift lines?  Are you tired of getting sized up by over-adrenalized men clad in overpriced outerwear the color of Wildberry Skittles?  Do you dislike overhearing clueless conversations and being asked silly questions?  True peace of mind in a wintry mountain wonderland is hard to find when JHMR is open. In the offseason Rendezvous is just another peaceful, powerful Teton peak.  Taste the Rainbow!  Avoid the Skittles.

5.  Pets allowed.  Dogs love skiing with humans, and humans love skiing with dogs.  There are still many canine first descents waiting to be plucked from Rendezvous Mountain.  I’ve got $99 for the first person who sends me footage of a dog willfully hucking itself into S&S. That would be $99 (errr, $136) better spent than wasted on one day’s worth of gaper paper.

6.  Classic Characters.  Rendezvous Mountain is not entirely deserted during the off season… its populated by local and travelling misfits!  Some of the coolest people I’ve ever had the privilege of skiing with were met while touring JHMR in the offseason.  Most of the employees on the mountain are cool, classic characters too, as long as you respect their work and don’t step on their toes.

7.  Affordable slopeside accommodations.  I’m not 100% sure if its legal to camp on Rendezvous Mountain in the offseason but I am 100% sure that I don’t care.  Camping mid-mountain is a great way to access several days of the best snow and terrain on the upper mountain.  The ever-expanding sea of parking lots at this incredible peak’s feet is overnight parkable during the off-season as well.

8.  Free, convenient parking.  When JHMR is open you’ll spend $5, $10, or even $15 for the privilege of parking within 5 miles of the lifts.  In the off season you can leave your rig a urine stream from the snow for the unbeatably low price of nada.  Bring a cooler of frosty beverages on a sunny spring day and you’ll probably find a blossoming aprés ski scene centered around your car.

9.  Touring Rendezvous Mountain is great for your physical fitness.  A typical day of skiing at JHMR involves a 400-800m clomp in boots, an hour or two standing in lift lines or squashed into the tram, an hour or two of skiing, a 5 to 30 minute hike or two, an exceptional number of 12oz arm curls, perhaps a little dancing, and — if you’re lucky — a rigorous session of sexy time followed by a good stretch.  A typical day of touring at Rendezvous Mountain involves several hours of uphill skinning, bootpacking, schralping, and gazing about in wonderment followed by the requisite 12oz arm curls, perhaps a little dancing, and — if you’re smart a good nights sleep so you can enjoy another long, slow, uphill voyage the following day. Wise man once say: Slow Ride: take it easy! In skiing and in all things.

Long story short, nothing beats having one of North America’s most famous ski mountains all to yourself.  A few tips and tricks…

*Packed groomers hold snow on the lower flanks.  When the lower flanks of the rest of the Southern Range are covered with rocks, brush, and rotten slush, Rendezvous Mountain can ski perfect spring snow all spring and even into the summer.

*Study snow coverage from the base and plan accordingly so you have to walk downhill as little as possible.

*Tread lightly, avoid buildings/equipment, and be respectful of resort employees working up there. If you’re skiing in the fall and it’s snowing heavily or close to opening day, they may be bombing up there so pay attention and don’t be a dumbass.

*Don’t let anyone tell you that you can’t be up there. It’s your national forest and you’ve got as much right to be there as some corporation does.  Let them know that you don’t need a nanny and take full responsibility for your own actions.  Thank you very much.

*If you’re new to the area, definitely get your hands on a trail map and maybe even a GPS before skinning up. Rendezvous Mountain is gnarly and it’s pretty easy to put yourself in a bad place if you don’t know where you’re going.  Stick to the obvious runs unless someone in your group is very well-acquainted with the area.